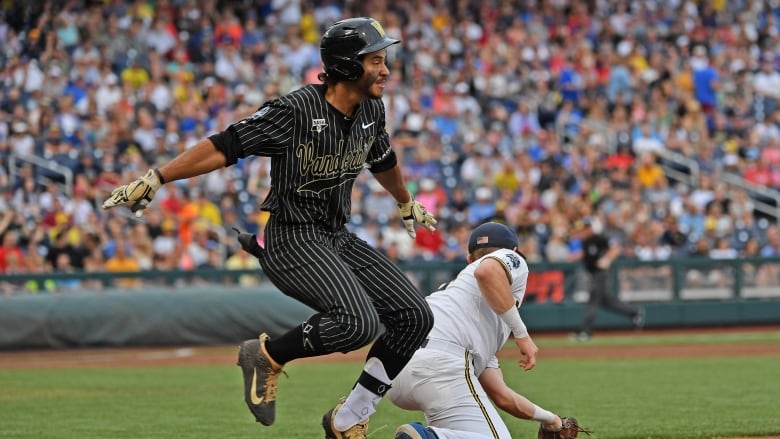 With their first pick in the initial instalment of this year’s truncated MLB draft, the Toronto Blue Jays picked the best available player from their draft board.

Thanks to the Orioles going off the board with the second overall selection, it maybe wasn’t the player most experts had predicted.

Vanderbilt’s Austin Martin was widely seen by the industry as the second best player in this year’s crop of draft candidates, but as sometimes happens on draft day, Martin fell to the Blue Jays at the fifth pick, and Toronto was thrilled to get him.  “We were a little surprised, but we certainly were prepared to make that selection,” Farrell said in a conference call after the draft.  “We had identified Austin as high-end talent.  We were fortunate to be in a position where he was still available.”

Martin has long been one of the favorites for the first overall pick in the 2020 draft. Martin has some of the best pure hitting ability in the class, with eye-popping bat speed, excellent contact ability and impressive plate discipline as well. Martin also appeared to be increasing his power production.

There is absolutely no doubt about Martin’s bat, and while not a burner, he’s considered a plus runner.  The question is about where that bat ultimately plays – Martin was moved to SS this spring,  and while he as the tools to be a solid defender wherever he plays, he looked awkward there in a small sample size of viewing before the shutdown.   Teams would have liked to have seen more of Martin up the middle before the draft, but obviously they were pleased with what they did see. If Martin is moved to CF, where spent time this spring and with Team USA last year, the Blue Jays lack of outfield depth will be reduced.  He has the speed and defensive instincts to thrive there.  ESPN’s Keith Law suggested last night that the Blue Jays start Martin in AA next year, and while that seems aggressive, it’s a scenario that’s easy to see.  If an extended Arizona Fall League includes a Florida component, there’s little doubt that we’ll see Martin suit up in Toronto uniform.

Martin has the potential to hit for a high average and extra bases, draw walks, and generally be a table setter for the heart of the Blue Jays order one day.  Shane Farrell could probably write a book about his adventures from mid-March until last night, and he must have been ecstatic to see Martin’s name still there when Toronto’s turn to pick came up.