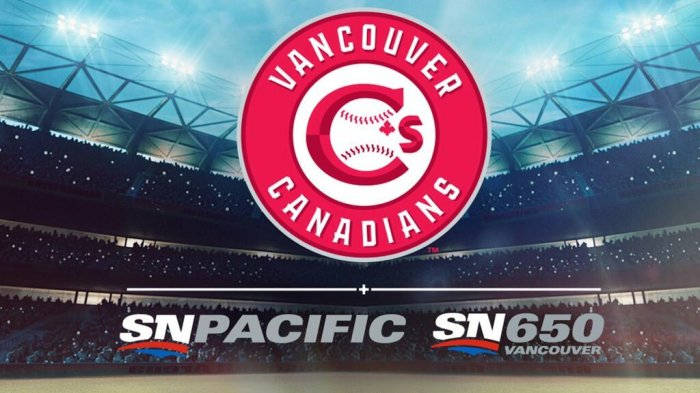 The folks at Rogers will make this official next week, but FBJ has received an advanced schedule of Vancouver Canadians games that will be televised on Sportsnet Pacific when the four-time Northwest League champs begin play in June.

The C’s had no home games broadcast last year.  Prior to that Shaw had televised a half dozen games for their subscribers west of Sault Ste Marie, ON, on their cable channel, but that ended after the 2017 season.

TSN held the radio rights for C’s games, but that deal expired and Sportsnet picked up the rights last fall, and included six televised games as part of the deal.

One of the concerns I’ve had with past broadcasts from Vancouver involves the configuration of Nat Bailey Stadium, a venerable old ballpark that dates back to the times before tv.  A camera posted on the 1st Base side of the old grandstand gave something of a distorted view, but a source has indicated that Sportsnet has the means to come up with a better camera angle for viewers.

The C’s have an atmosphere at The Nat that you would be hard pressed to find anywhere in minor league baseball.  They routinely sell out, with over 6 000 vocal fans in attendance every night.  For friends of mine here in Southern Ontario who muse about going to Seattle in the summer to join the Blue wave when the Jays play there, I suggest they fly in to Vancouver first, and take in the experience that is a C’s game.  If you can’t make it out west, the next best thing will be a C’s game on Sportsnet.