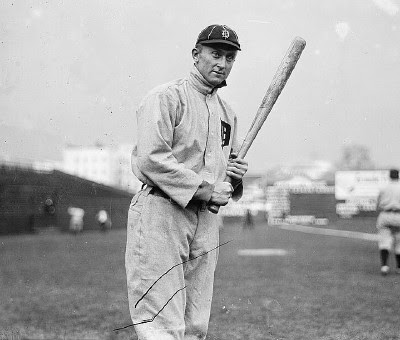 This is another post I’ve brought over from my former site, written in 2014.

On the 100th anniversary of the event in September, we wrote about Babe Ruth’s first professional Home Run, hit in Toronto.  Since that time, we’ve learned that Ty Cobb played his last game in an MLB uniform in Toronto, as well.

It was a mid-September 1928 exhibition game against the International League’s Maple Leafs franchise, in their sparkling new park, Maple Leaf Stadium, at the foot of Bathurst Street.  Cobb was wearing the uniform of the Philadelphia Athletics, who were in the middle of a pennant race –  which didn’t stop Athletics’ owner Connie Mack, who was always looking for sources of revenue in between sales of his star players, from scheduling an off day exhibition game.

Cobb, of course, is best known for his days as a Detroit Tiger.  He served as player-manager for the Tigers from 1921-26, but never finished higher than 3rd place.  Cobb, supposedly worn out and tired of baseball, retired following the 1926 season.  Earlier in the season, Cobb and fellow future Hall of Famer Tris Speaker were both alleged to have thrown a game several years earlier, which came to light just after the season ended. Commissioner Kenesaw Mountain Landis declared the pair innocent after a lengthy investigation.  Eager to restore his name, Cobb looked for an opportunity to resume his playing career, and Mack gave him 50 000 reasons to become an Athletic.  At the age of 40, Cobb hit .357/.440/.482 for Philadelphia in 1927.
Cobb was one of the most reviled players in the history of baseball.  The Georgia product made his MLB debut in August of 1905 with the Tigers, just three weeks after his mother, mistaking his father for an intruder, shot and killed him.  During her trial, it was revealed that Cobb’s father suspected her of infidelity, and was sneaking past her window, supposedly on a business trip, trying to catch her in the act.  Cobb’s mother was acquitted, but he admitted his daring, brusque, and downright dangerous playing style was in memory of his late father, who Cobb worshiped.
Cobb quarreled throughout his career with teammates, fans, and team owners.  He went into the stands in a 1912 game in New York to go after a fan who had been heckling him, and beat him senseless.  Turns out the man only had one arm.  An avowed racist, Cobb was involved in many ugly incidents with racial overtones.
Cobb also knew the value of a dollar.  He was one of the first investors in a fledgling company called Coca-Cola, and early in his playing day befriended a young, unknown auto maker named Olds.

The 1928 A’s were one of the greatest teams of all time.  With Cobb, Speaker (who had joined the club with Cobb the year before), and Eddie Collins on the roster,  Philadelphia had 3 players with over 3 000 career hits, the only time in MLB history this has happened.  Along with pitcher Lefty Grove (who some would argue was the greatest hurler in baseball history), catcher Mickey Cochrane, outfielder Al Simmons, and a young corner infielder named Jimmy Foxx, the Athletics featured seven future hall of famers, in addition to legendary Manager Mack.

Despite this collection of talent, the Athletics finished 19 games behind the Yankees’ famous Murderers Row team the year before.  In 1928, however, they stayed neck and neck with New York for the American League lead for most of the season.

Cobb continued to hit as the spring turned into summer, but playing right field every day was beginning to take its toll.  The A’s played 8 doubleheaders in July, and he was clearly running out of gas.  Mack was notorious for scheduling exhibition games on off days in those pre-player’s union days.  And the road trips, because travel was done by rail, tended to be long and gruelling.  Philadelphia spent almost the month of June on the road, on a 6-city, 23 game trip.  We couldn’t find record of it, but it’s highly likely that Mack had scheduled some games on the five days off the club had during the trip.  By the end of July, Cobb’s legs could no longer stand the stress of playing every day, and he made his last-ever MLB start on the 26th against the White Sox, going 2-5.  The next day, Cobb was replaced in the Athletic’s lineup by 24 year old Mule Haas, while Cobb was relegated to pinch hitting duties.

The A’s and Yankees continued their pennant race into September.  When they beat the Red Sox on September 8th, they were a half game ahead in the standings.  Philadelphia travelled to New York to take on the Yankees the next day, and fell out of first by losing three of four to the Bronx Bombers.  A week earlier, Cobb recorded his 4191st and final hit against Washington, and grounded out in his final at bat, a pinch hit appearance against New York, on September 11th.

A dispirited group of Philadelphia ballplayers likely boarded the train in New York, destined for their final road trip of the season, a three week venture to Cleveland, Detroit, Chicago, and St Louis to close out the season.  Mack, of course, had scheduled exhibition games against Albany and Toronto along the way.

Cobb started the game despite not having started in over a month and a half, likely to give the regulars a bit of rest, and maybe also because shrewd businessman that he was, he probably had negotiated a cut of the gate with Mack.  We’ve found no proof of this, but we can’t really see a reason for him sticking with the club and getting only 9 ABs since the end of July otherwise.

In fairness to Cobb, he was a very complex man who was obviously traumatized by the death of his father.  There has been a movement of late to rehabilitate his character, and publicize some of his forgotten good works.