Fans in Manchester, NH, home of the Blue Jays AA Eastern League affiliate, have reasons to be excited.

Not only did the club extend its Player Development Contract with the Blue Jays for another two seasons last month, their roster released today includes two of the top prospects in all of baseball in the form of Vladimir Guerrero Jr and Bo Bichette: 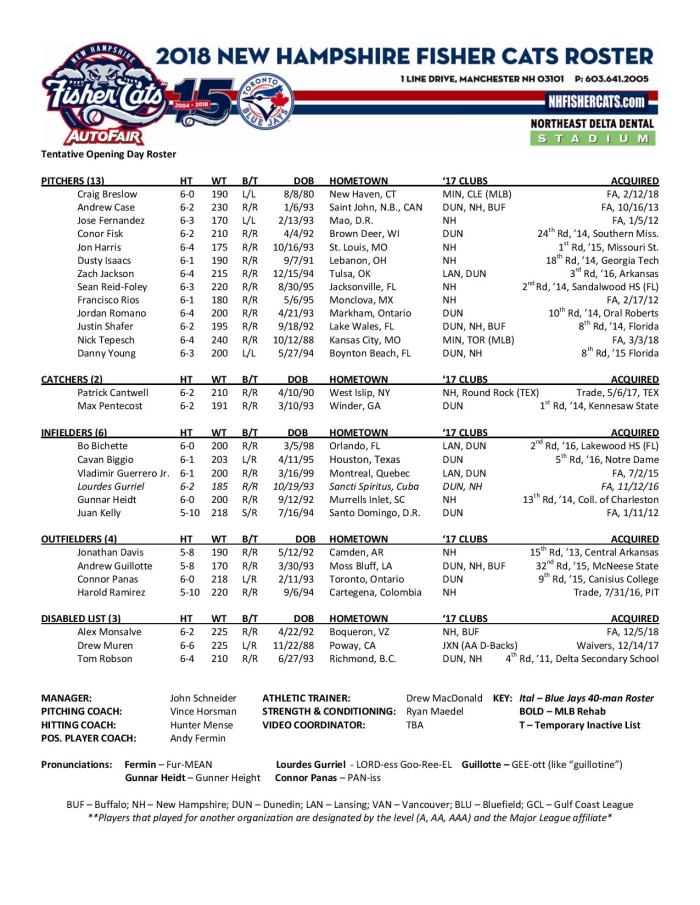 Much of the Florida State League co-champion Dunedin Blue Jays roster moves up to New Hampshire, giving fans potentially one of their most competitive clubs in several seasons.

The inclusion of Lourdes Gurriel Jr on the roster was something of a surprise, as he seemed ticketed for AAA after spending half a season with New Hampshire last year.  His play this spring had been described as lackluster, but whatever the case is, Gurriel still needs plenty of reps, after missing a good chunk of last year and all of the two season prior to that.

New Hampshire should have decent starting pitching, led by (in no particular order) Jordan Romano, Nick Tepesch, Sean Reid-Foley,  Francisco Rios, and Jon Harris.  The latter three are repeating AA, and there were hopes that SRF might reach AAA, but a disappointing spring has him headed back to New Hampshire.  There likely was no room for him in Buffalo’s rotation anyway, and after reaching AA at 21 last year, there’s still room for development.  Andrew Case, Dusty Isaacs, and Danny Young should form the core of an effective back-end of the bullpen, along with Zach Jackson, who was promoted from Dunedin.  Veteran reliever Craig Breslow signed a minor league deal with the Jays and had an opt out on March 22nd, but decided to stick with the organization.

Max Pentecost slipped through the Rule 5 draft last fall after being shut down late in the Arizona Fall League.  Veteran MiLB Patrick Cantwell joined the organization late last year, and appears to be splitting the Catching duties with Pentecost.  To be honest, it’s surprising there isn’t a 3rd Catcher on the roster, as Pentecost’s duties behind the plate have been limited.

The infield appears to be Guerrero at 3rd, Bichette at SS, Gurriel at 2nd (spelling Bichette on occasion), and Juan Kelly at 1st.  Cavan Biggio has played 2nd since being drafted two years ago, but was working out at 1st this spring.  Gunnar Heidt can play several infield positions.

The New Hampshire OF has returning CF Jonathan Davis, who had strong Arizona Fall League and Spring Training campaigns, anchoring it.  He’ll be joined by returnees Harold Ramirez, who did not hit as well has had been hoped last year, and the multi-talented Andrew Guillotte.  Connor Panas, along with Romano, represents the Canadian content on the roster.  Panas has mostly played 1st or DH’d since joining the Blue Jays in 2015, but he can play the corner OF spots.

Ladner, BC native Tom Robson starts the year on New Hampshire’s Disabled List.  Robson, who was converted to full-time relief last year after returning from Tommy John surgery in 2016, appears to be headed for surgery again.  Another Canadian, Lefty Shane Dawson, was a member of the Fisher Cats’ rotation the past two years, but was released this past week.

John Schneider moves up from Dunedin to helm the Fisher Cats.  Schneider played for 7 years in the system after being drafted by the Blue Jays in 2002, and is entering his 10th season as a Manager.  Huner Mense joins him as Hitting Coach. Mense played in the Padres system for five seasons before returning to school and receiving his Masters in Sports Psychology.  He served as the hitting coach for the Padres Northwest League affiliate before joining the Blue Jays this off-season.  Nova Scotian Vince Horsman returns as Pitching Coach.  Horsman originally signed with the Jays in 1984, and has been a coach in the organization since 2009.  Andy Fermin, who turned to coaching last year after 7 years as a player in the system, returns as Position Coach.